For the last three years or so, I have been hearing about this new, fourth type of chocolate – ruby. The premise is that this chocolate appears light pink, with no added coloring whatsoever. Naturally as a person who dislikes fruit of all varieties, it’s more mystery than anything that piqued my interest. Traditional chocolate is so amazing and it’s hard for me to imagine that the world needed another version but for the sake of the blog, I was on the hunt. 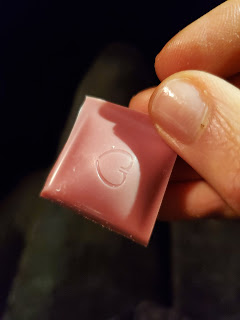 Originally, ruby chocolate was limited in supply, hard to locate and expensive to buy. Fast forward to today and there’s a ruby chocolate Kit Kat, Hagaan Dazs ice cream bars coated in this stuff, etc, etc. Last week, we received an Amazon & Whole Foods advertisement featuring a sale of Chocolove chocolate with a picture of the ruby variety, so it was all too perfect a few days later when we found ourselves driving right by. 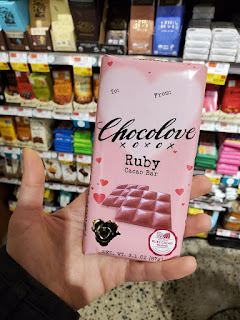 Chocolove chocolate is usually very good, so I could barely wait to get back to the car before cracking the bar opening and giving it a try. I’m not sure why I was so surprised when I finally unwrapped it by how startling the ruby color was, but it looked exactly like strawberry yogurt. Having been apprehensive by the mention of berry notes on the packaging and from anything that I’d ever read previously, laying my eyes on this was not a relief. 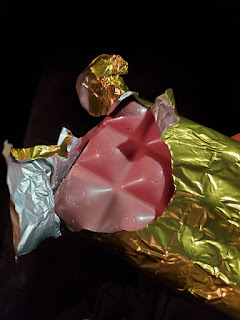 The ingredients are as advertised: sugar, cocoa butter, milk, cocoa liquor, soy lecithin, citric acid and vanilla. Zero mention of food coloring. Even several days later, my mind is blown. And the taste? Equally as hard to understand as I ate it. The texture reminded me of white chocolate – waxy more than crumbly, light in texture and in flavor. What was unmistakable was the tartness. While the berry flavor was mild, if at all present for me, the aftertaste had a bite to it that reminded me of unflavored yogurt in the sourness. 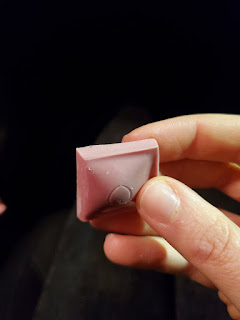 I only bought one bar and I split it up into thirds to share the novelty with my sister and parents, so that lets you know about how much I enjoyed this. That being said, I recommend trying this for the first time because it’s so amazingly different from any notion of chocolate that ever existed prior. My secondary recommendation is that this be re-named something besides chocolate. Who says you can't reinvent the wheel?