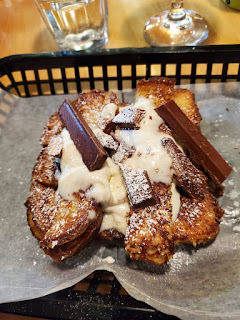 I’m not ashamed to say that I’ve been drooling over Taco Daddy’s Social Media since they opened in Stamford a few months back. It’s like some genius engineered both a drink and food menu which could make even the most Instagram adverse person pick up their phone and create a Foodie Insta to capture their TD meal. After tagging anyone who I thought might come with me in their posted food pics, I was all too delighted to go on a rainy Saturday in January.

It should be mentioned that starting January 01st, I decided that I would eat less sugar and avoid alcohol more often to get my nutrition back on track. December found a good reason to have cocktails and dessert on a near daily basis, so it was time to reign it in. Funny for me that the only Saturday I had free for brunch this month was on January 4th, so it wasn’t exactly a long run towards a clean diet that I had originally planned for but such is life.

Taco Daddy is on Open Table, so it was all too easy to make a resevation for 4 people at 1130AM. When we arrived, I was surprised to learn that 1130AM is the minute they open – but the staff was as friendly as could be. This restaurant took over where Harlan Social used to be in Stamford, a place where we had visited several times in the past so it was a shock to see that they had closed and this was the replacement but it looked much the same, if not a bit more casual.

Our server was perfectly happy to talk us through the cocktail menu – and that was a good thing based on how cool and creative the menu was. The names of the drinks were so cool that I was tempted to order ones that had ingredients that I don’t care for just to say “I’ll have the Missed My Flight”, etc. Unsure of my food order, I went with the prosecco – but the other three people at brunch were far more adventurous. You can see from the picture that the glassware was as ecclectic as the rest of the experience. The Gin and Tonic is purple and was poured with the kind of heavy hand you want when it’s early morning. 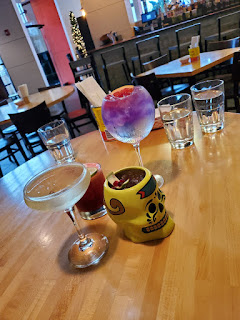 When we arrived, there were a few complications with the menus we received as some copies had many food items and later versions giving to us had a much smaller selection but I wanted one thing and was not too shy to ask. Kit Kat French Toast; that’s right. I wouldn’t even list Kit Kats on my top 10 favorite chocolate desserts, but can you imagine? French toast, which is already good – draped unashamedly in melting chocolate candies? The description mentioned that the salted caramel cream was also a part of the dish, also not necessarily my favorite thing but since I had waited so long to get into this place and all of their photos of this had blown my mind, I was not planning to leave with any regrets.

When my breakfast came out, I was surprised to see that the portion was on the smaller side as pictured above. I’m not sure what the serving size should be for such a calorie bomb, but two pieces at first sight left me wanting. It was an interesting mix really – with the french toast being very good, but the cream which was quite solid and not cold left me a little put off. Bites with the candy in them were good, because sugar, sugar, sugar. The addition of the maple syrup cut the tartness of whatever was in the cream to make it have such a bite. In the end, I didn’t even finish the dish – because I wasn’t enjoying it after the first few initial bites.

I had a bite of my fiance’s tacos and they were good, if not a little heavy in the masa taste of the shell – but the real MVP of this restaurant was was incredible game selection. When we were done eating, we played mini golf, mini bowling, Rock ‘em Sock ‘em robots, and Jenga. This place was cool and the food was really instagram friendly, but not exceptional in actual taste. That said, there’s a cheeseburger burrito which has my interest and could get me back there for another visit.