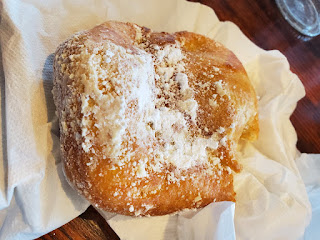 I have an acute obsession with exploring shore towns during their off season. With my aversion to crowded spaces, loud noises and humans – being at the beach in the swing months is really something I enjoy beyond measure. Last weekend, to celebrate our third year of dating – the boyfriend and I traveled up to Narragansett, Rhode Island to see what it was all about. We’re habitual about this April trip and often find ourselves in popular summer destinations before the bulk of businesses have re-opened. This visit was little exception.

Before we even hit the open road, I am planning what we are going to eat. Key words such as “brewery”, “ice cream” and “seafood” hit my browser before the hotel reservation is booked. And my travel partner in crime? HUGE donut guy. Lucky for him, it’s hard to search too far into Narragansett without reading reviews of Iggy’s. Described as a Doughboy & Chowder House, their website touts celebrating 30 years of existence, being featured on several news/media outlets, as well as actually selling their doughboy mix to make your very own versions of their specialties at home.

Normally a website with so many accolades and marketing banners would turn us off as a “tourist” trap, but head to a town where 70% of stores are closed and you’ll reconsider. On a morning walk, we walked right past one of their locations and while as you can see – it looked gorgeous in its new architecture, it also looked completely closed for the season still. 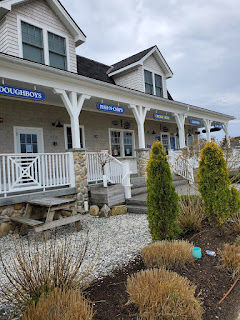 I loved Narragansett. The weather was crazy and we had an adventure getting to and from Block Island, but this place was really up there for me. I’m still mystified how one town can have so much shoreline and water views everywhere you turn. I’m not sure that I’ll ever get back there, but I hope that I do. After surviving a puke-filled ferry (not us), questionable lobster, and miles of walking in the whipping wind, we got back to the mainland, called Iggy’s and rejoiced in the delight of hearing that they were in fact opened for the afternoon. Rolling up, we were in awe at the setup for the massive operation. It was pretty empty for our visit, but there was clear infrastructure there to handle the masses with ample seats and places for the line to form. Being April, the only way to order was at the takeout window, although the restaurant allowed you to snag a seat inside after pickup. The interior was well appointed, with a rolling fire in their fireplace. Hours and hours of being in the cold wind and fried dough near a fireplace was just what the doctor ordered.

As a note, the doughboys can be ordered as a ½ dozen or full dozen. Toppings are either plain, granulated sugar, sugar & cinnamon or powdered sugar. A ½ dozen with powdered sugar were $5.49 and not being sure if we’d have another dessert later in the day, we went with that. It probably took about 10 minutes after the order to get them, so it was very encouraging that they were being freshly fried. 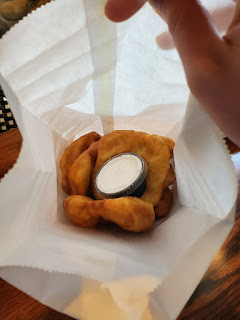 What shocked me the most was how large each doughboy was and how heavy in weight. We were initially apprehensive that 6 wouldn’t be enough but I had to actually force feed myself to get the majority of a second one down. This place is great because they give you the powdered sugar in a container to allow you to decide how much additional sugar you prefer.

Taking a bite when they first arrived, they were hot, fresh and delicious, but without the powdered sugar they weren’t too remarkable. Dumping powdered sugar into a paper bag and shaking these things was not for the faint of heart, so be prepared to get messy. Once you add the topping, you’re in for a good time. The hot oil soaks that sugar right up and the flavor is amazing. 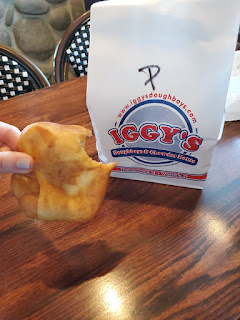 The edges are crispy, but the middle is doughy and the only improvement I could even dream to suggest would be an option to add a scoop of ice cream. I’m guessing it’s not cost effective for them, but it would have been great to be able to order a variety of the toppings, or even just one doughboy by piece, since they didn’t seem like they’d save well and we only were able to eat less than 4 without having to toss the rest regrettably. 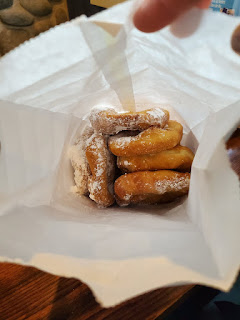 Reading Yelp before we went, I am surprised how many critical reviews there were for this place. The building was gorgeous, the doughboys were freshly fried and the value was excellent. That said, I didn’t have to wait more than the time it took them to prepare my order so I can only guess what kind of hell that might be if I waited in a long line prior. The only regret that I have from the occasion is not trying their famous chowder, but there’s always the off season of 2020 for that.

http://www.iggysdoughboys.com/
Posted by Amy Nicole at 7:42 AM No comments:

So it seems that I have had the pleasure of surviving another winter here in Connecticut. It’s been a mild one, but still filled with all of the things that keep you on your couch ordering dinner delivery from GrubHub rather than exploring downtown.

To save money, calories and forced coworker socialization, I go to the gym during my lunch break nearly religiously. There’s really nothing about my routine that I vary, but I love just zoning out, blasting music and getting my body moving prior to the final 4-hour push in the cubicle. On this particular day in April, the sun was shining and the birds were chirping in a way you’d only notice at the end of winter. By May, it would already be something you would take for granted – the past winter a terrorist who had faded in your mind.

On a whim, my coworker – an artisanal coffee enthusiast asked me if I wanted to go for a walk and I figured “routine be damned”. I’m hoping for at least a good 80 years on this planet and I can’t imagine that I will get too many like this one. He’d mentioned to me the coffee at Lorca a few times, so it made sense to make that the destination to finally see what it was all about.

Truth be told, four years of culinary classes as a part of my undergrad degree yet somehow, I am a K-Cup, Keurig girl. Unless it’s a latte, I prefer the mildness of Dunkin’ rather than Starbucks and I equate it to a cigar smoking virgin lighting up their first one, a Cuban. Caffeine is continually flowing through my veins, but it’s always that mild and cheap shit. My mind was open and over to Lorca we went. 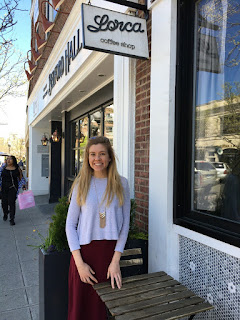 Walking into the place, I was blown away by how small it was. There are a few tables inside and just two outside but there was a tremendous amount of staff behind the counter. I am on a huge Matcha Latte kick lately and for those of you who don’t know, it’s matcha powder mixed with hot water to create a green tea, combined with steamed (almond – for me) milk. 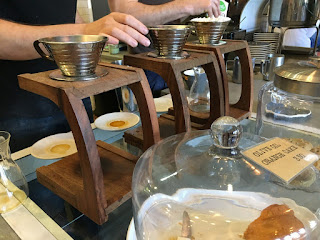 Lorca only serves up one size drinks and as a fan of a XXL if I can get it, I was a little bit bummed. The staff was the cool hipster types that met my expectations and the latte art was as good looking as a girl can hope for. The real entertainment was watching the baristas make the pour over coffee, which people were ordering up faster than they could make. I’ve never had this, but it was explained to me that there are many ways in the process to change the strength and taste of the coffee so someday when I am hungover maybe. As a note, they have a second location in Cos Cob and a small menu of lunch selections, which I did not try.

I really wanted to love this place, but the latte was the sweetest matcha latte that I have ever had. My first sip was at the point of being unpleasant, as somebody who doesn’t drink any sweetened drinks when it can be avoided. If I wanted a hot and drinkable dessert and I couldn’t find a hot chocolate, I would order this. That said, I suspect they just use a really sweet almond milk and that other orders may be better. My accomplice in this Lorca mission got an alfajor cookie and even though he really likes Lorca, he said “Probably not worth the sugar”. 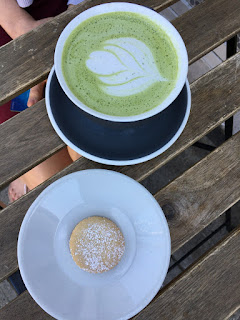 I love being outside, trying somewhere new and caffeine so I enjoyed all of this. That being said, I am going to go and make myself a K-Cup.