Two years ago, I was lucky enough to participate in an international training program at my company, which involved three trips to Switzerland during the duration, meaning that it was a good way to try a bunch of different foods and to meet a handful of cool people. Now fast forward to a couple of months ago, my friend Dario from this program reached out to let us know that he was planning a visit to NYC and would be on our side of the pond. After experiencing an incredible amount of hospitality during my travels, it only made sense that it was time to return the favor. 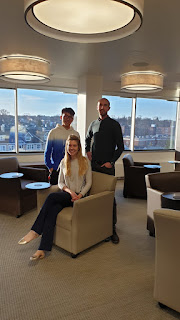 The best part about the entire ordeal? When I asked him what kind of cuisine he would prefer, he told me 1. American, because we were in America and 2. Somewhere that I haven’t been so it could be a blog post. Now this made my whole day. I am pretty sure there are about 3 the readers of this blog, most of whom either are related to me or date me, but if even one reader is in Switzerland then this blog in INTERNATIONAL! Too delightful.

Since I generally go out to eat more often than I cook, it was sheer luck that Hudson Grille on Bedford Street had recently changed hands and rebranded to Hudson Social and DOUBLE luck that it was also Restaurant Week. As learned that evening, Switzerland does not have a “Restaurant Week”, so it’s a real marvel that you can get 3 courses for $28. If you don’t overeat in America, were you even here?

The last point to mention here before I get into the meat of the review is that I generally avoid eating places that become rowdy bars at night. I’ve spent many, many nights enjoying copious amounts of Bud Lights on the dance floor of Hudson, so I was apprehensive that the restaurant would smell too much like stale beer and puke for my esteemed colleague - but read on to find out why this was not the case at all. 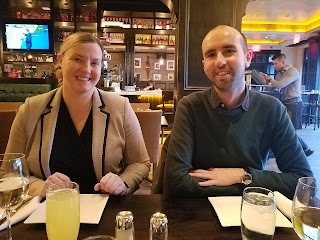 After a brief office visit, Dario in addition to a few other colleagues and I headed to dinner at Hudson Social around 5:30PM EST. I was able to make a reservation on Open Table, thinking restaurant week might beef up the attendance, but we were the only seated table in the place. The restaurant still had a great ambiance and service was attentive and alas, no signs of a rowdy previous Saturday night to be seen or smelled. 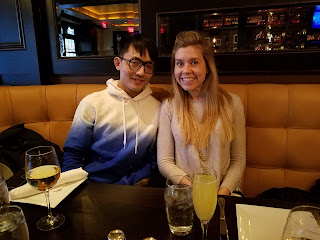 Their cocktail list was what you’d expect and it was even $1 off each drink for RW, but I went ahead and got a mimosa because it’s cold and flu season. Half Full Lager was on draft, so Dario was able to take a sip of our local beer offerings on his visit as well. In reviewing the Restaurant Week menu, I was really blown away by the options for $28. There are also restaurants doing the same, but for $38 and this seemed like it couldn’t be beat. All 4 of us decided to utilize restaurant week and I don’t believe anybody was sorry. 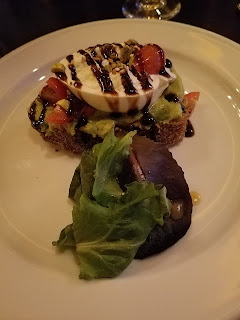 My appetizer order was the avocado and burrata toast and let me tell you, this was the absolute star of the show. I could have had an additional slice of this and left the happiest camper that you’ve ever seen. Basic or not, I eat a ton of avocados and this toast was superior to most. The toast was topped with marinated tomatoes, balsamic, pistachios and a burrata that made you beg for more. This appetizer was smaller than some of the others that came out to our table, but I would go back just for this on any given Sunday morning given the chance. 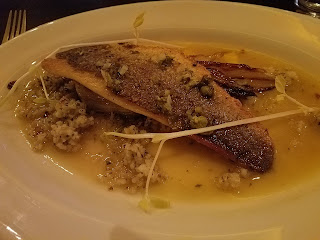 Moving on to my main course, I decided on the pan roasted branzino, which came with roasted fennel, tabbouleh, orange segments and gremolata. Now I had already read reviews on Yelp, so I wasn’t too shocked by how incredibly small and thin the fish was – but there was barely any tabbouleh and absolutely no orange slices to be found. I don’t like fruit, so I wasn’t disappointed but I also don’t generally eat fish skin but was forced to just because I was afraid I would otherwise be leaving the dinner quite hungry. The picture here looks big, but it is an illusion. It’s probably a lot to ask for fresh fish at such a low price, but the fish was truly very dry and fried being so thin. I would not order this again here, Restaurant week or otherwise. 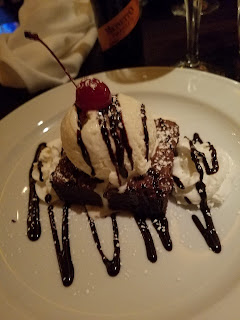 Following that fish fiasco, the brownie sundae was delivered and all negative memories of the entrée were erased from my mind. The brownie was soft in the center and the ice cream was cool and creamy. Lately most desserts have been a real letdown at restaurants for whatever reason, but this brownie sundae was decent.

The owner came over twice to check on things and seemed really eager to ensure that we all had a good time, which I absolutely did. As we were leaving, the place was really filling up for dinner on a Tuesday night I am hopeful that this guy will have a lot of success in the location. Overall it seems restaurant week was the best way to get to know this restaurant to be clear on what’s good to order at brunch and what’s better to skip. If being social is your focus, this place is the spot.