I’d like to meet the person who invented the 5-day workweek. Anyone with such bad judgement as to think that adults can get through that type of repetition without a break must have the type of terrible judgement of somebody that you’d want to party in Vegas with. Nearly 10 years in the workforce and I still can’t manage. You wake up Monday morning filled with all of the intention of eating healthy, getting your exercise in, sleeping The Full 8 and then life happens. Making it halfway through the week feels as good of a reason to celebrate as any. 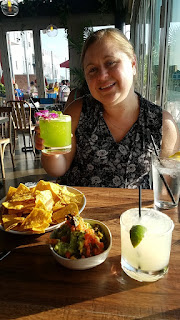 Having recently discovered that my gal pal Val works in Stamford, it didn’t take long for us to come to the agreement on the idea of monthly dinners. Being a Harbor Point resident, I was all too happy to walk over to Mexicue for what would by my third visit.

On the night before the restaurant opened, they invited all Harbor Point Residents to have a sneak peek of the food and when it came time to bring the bill, they announced to us that all drinks and food at the preview were FREE. I will tell you what, at first – I was blown away by that. I immediately took to the restaurant, which is a good thing as my bedroom window is about 10 feet away from the place.

Visit 2 was far less remarkable. My Mom and I sat outside and the weather was the best part of the experience. We managed to rack up a bill over $100 for 3 drinks, 4 tacos and a small guacamole. Here’s the thing about Mexicue though, it has tremendous curb appeal. It’s trendy and I suspect most people who see it want to go at least once. 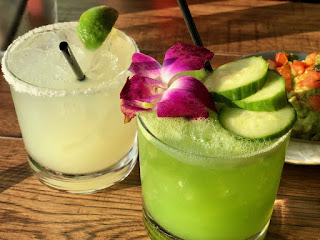 In sitting down for visit #3, Valerie revealed to me her inspiring habit of ordering menu items denoted as seasonal for the simple fact that they are limited time only and that she likes to mix it up. I thought that was super fun and adventurous and she put her money where her mouth was when she ordered her cucumber margarita. Trying it, I found it to be extremely potent of the green vegetable and viscous. Val said she found it refreshing and from the picture you can see the drink was really something else.

I am a woman with a weakness for a frozen margarita with salt and after seeing it on their menu, I was disappointed to hear that they actually don’t carry frozen margaritas after all. If that’s the case, maybe re-print the menu? I ended up settling on the house margarita with salt on the rocks and it was on the syrupy side. I’d still get it again (re: weakness), but it was more of a sticky dessert than a chance to get my buzz on. Round 2 was Modelo on draft and that was very cold and enjoyable. 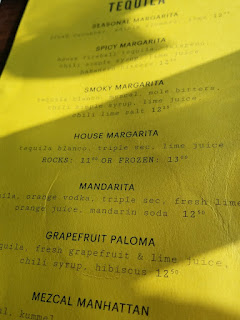 Service was attentive, but we had a good laugh because at the start of our meal, the waiter had his button-down shirt unbuttoned to a notable degree. By the end of the meal, he had undone several other buttons as the night went along. No idea what that was all about but Val said it made her think of this and she was spot on: https://www.nbc.com/saturday-night-live/video/digital-short-v-necks/n13225 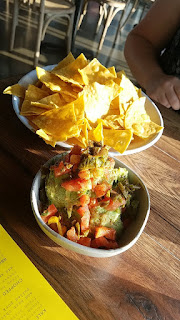 To start, we kept it spicy and went with an order of jalapeno guacamole. Normally I would shy away from getting anything spicy at a Mexican restaurant, but this place isn’t your “authentic” Mexican cuisine but rather your trendy Tex-Mex. The chips and guacamole were on point. Extra points because they didn’t awkwardly make it table-side. The heat was pleasant and the avocados tasted fresh. 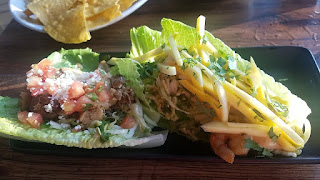 Every time I eat here, I always feel compelled to order the Romaine Lettuce cups instead of the taco shells, after eating the equivalent of a bag of tortilla chips to start and each time I find my meal to be mediocre at best. On this visit, I got one smoky chicken taco which had slaw, creamy chipotle sauce, pico de gallo and cojita cheese and the cheese was the best part;  seemingly sweet and freshly shredded. The chicken was dried out and supplemented by an overabundance of the chipotle sauce.

My second taco was the Wild Rock Shrimp which consisted of slaw, sliced mango, salsa verde, creamy chipotle and cilantro. Marginally, the shrimp taco was the better of the two. Part of Val’s order was the BLT Taco and the bacon was so flavorful and thick cut that it would be on my list to order for my next visit.

The view from the restaurant is gorgeous and sometimes a margarita is exactly the fuel you need to get you over the hump to face the end of the week.