Duchess Norwalk: Big D's Cheeseburger and the Case of the Missing Cheese

To a New England enthusiast, Connecticut is known for being the Constitution State, the home of Yale University and for white clam pizza. As a New Yorker taking up residence though, I would argue that this state should be known for its car property tax, the unbelievable amount of traffic at any given time regardless of the day of the week, as well as for Duchess fast food. Personally, I’d never even heard of Duchess before I started working in Stamford years ago, but apparently the presence in Norwalk has been for over 40 years so if anything, in true Amy fashion - I’m just late to this particular party. 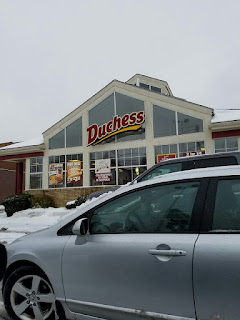 This past Sunday I had been dreaming of a particular fast food blog idea and to my stomach’s dismay, the sky opened up and a mix of ice and snow poured down on the streets. For this one instance, the blog idea was shelved but as always a girl has got to eat. Turns out that I’ve spent 7 years working in Stamford and now live 0.7 miles from a Duchess and have somehow never managed to make it inside the place so this winter day from hell turned out to be a perfect opportunity. With the help of the bravest man I know, we made our way without incident and I’ll tell you what. As I walked in, I was blown away with the variety on the menu (think egg salad, chicken salad, fried clam strips). Unfortunately, there was no line in front of us and the woman behind the cash register had her eye on us immediately. After brief consideration, I ordered the #1 off of the value menu thinking that if it’s #1, it must be a very popular order at this place. 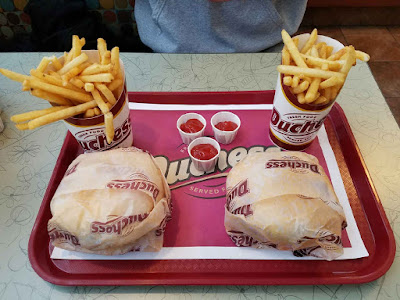 Waiting for my Big D Cheeseburger, I observed that the price wasn’t exactly as cheap as McDonald’s might be and that the pricing was more in line with Wendy’s. Wendy’s is hands down my favorite fast food, but usually runs you a few dollars more than your standard fast food so already my expectations were lifted. While we waited for our food to be ready, I noticed how pleasant the interior was. The tables and floors were modern and mostly clean and there was pleasant background music being played. In the center of the room, there were even a few flat screens playing News Channel 12, which I enjoy and had actually just been watching at home. 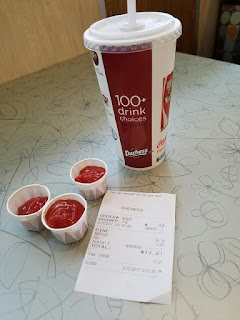 Having only had a yogurt, I was about drooling on myself by the time the food came out and upon first bite of the fries I thought two things: the first being that there was a coating of crust on these fries that made them bready and similar to Burger King fries and the second being that these fries were not quite fresh. It's not complicated. I like my fries undercooked and floppy and these were what I consider to be well done. Fast forwarding to when we were leaving, I heard a woman behind the counter tell a patron that they were whipping up a new batch of fries and he’d have to wait a bit and it makes sense that we must have gotten there at the wrong time. In the end, I left half of my fries behind because the only part I liked about them was the copious amounts of ketchup I used. 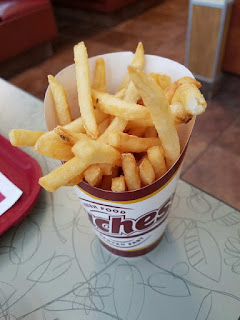 Forget the fries. I ordered a Big D Cheeseburger and that’s what I’m here to write about. The order came with one hamburger patty, lettuce, tomato, onions, pickles, and mayonnaise. I was surprised that no ketchup was added (before I drowned it in nearly half a bottle). The most notable thing about this cheeseburger was the bun. From their website, I realize now that they bake these buns on premise and you can certainly tell that. My bun had a hard time staying together during the brief duration that it took me to demolish this burger, but it was a decent trade-off. It was a surprise to me that the lightness of the bun made it almost have an undercooked quality to it in a way that I found enjoyable; perhaps the ying to the yang of overcooked fries. 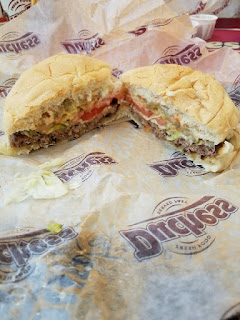 The predominant taste of my burger was mayonnaise and if you are adverse to this condiment then you would absolutely have to tell them to hold this from your burger. Without any type of flame grilled quality to it, I didn’t taste too much beef while eating my burger and from the picture and my taste buds, I have to think that they did not add any cheese to my sandwich. If they did, it was a waste because it didn’t register. The tomatoes were fresh, but the lettuce wasn’t. If I could do it over, I would skip the cheese (if I hadn’t already) and get a second patty. Personally, as a woman who loves mayonnaise, this reminded me quite a bit of a Whopper and it was enjoyable in the way that any mediocre fast food is still quite pleasurable. 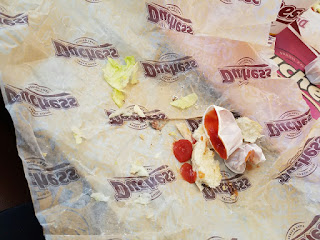 Now that I’ve had my first Duchess experience, I don’t think I’ll rush back any faster than I’ll head to Wendy’s but I can say that it was a pretty solid choice. Their menu is so extensive compared to a place like McDonald’s, so I would think it would lend itself to a nice stop on a group road trip or with a picky eater. Right out front was a sign for a $2.50 egg sandwich so for a cheap price and a homemade roll, I would be more inclined to check out their breakfast on the next go around. Duchess also has a very futuristic soda machine which I’ve been told is not new but from my understanding, there are 150 soda combinations you can make on it and that’s enough to blow your mind alone. On the plus, they haven’t yet published the calorie counts in their food and I always say, if you can’t count it then it doesn’t count.