Twenty eight years as a primary candidate for anger management who spends her time trying not to flip sits down at the breakfast table before 8AM EST on a Sunday and is encouraged by a yogurt company to do exactly that. Imagine that? I promise the likely one reader that this blog has that this is not a pumpkin blog. That being said, it’s only natural that consumer packaged goods companies step up their seasonal game during the fall and announce the introduction of pumpkin flavored everything to their product lines. I’m just human, born without any real will power to resist.

Cue: Chobani Greek Yogurt Pumpkin Harvest Crisp Flip, which is described as pumpkin low-fat yogurt with pie crust pieces, pecans and glazed pumpkin seeds. Besides the contempt that I hold in my heart for Greek Yogurt, I like every piece to this puzzle here. There’s a rule of thumb in my head that if you add pie crust pieces to anything, your mind will blow. If I had to wake up and eat yogurt, then hell let’s dress it up like a dessert. 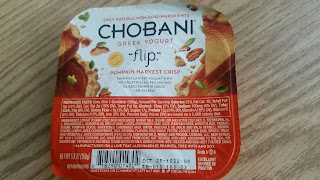 The contents of this yogurt racks up to 210 calories, which is reasonable enough by my calorie counting (lack of) standards. Since I wasn’t blown away last year by Chobani’s pumpkin yogurt, I easily moderated my expectations here. If my memory serves me, which it rarely does these days, my biggest issue with last year’s yogurt was that it wasn’t sweet. As a self-proclaimed sugar addict, I was left feeling want.

Opening the lid to this thing, I thought “Oh God.” This yogurt does not appeal to your eye. The expiration date was far in the future and perhaps this container suffered from natural settling over the time, but there was water sitting on top of the yogurt and at first sight, I would describe the innards here as looking very “tired”. 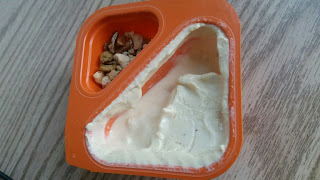 To get a good sense of what I was looking into, I reluctantly tasted the pumpkin yogurt alone and WOW. This is not the same pumpkin yogurt that broke my heart last year. This should be more accurately described as low-fat pumpkin pie yogurt as the base. The missing sweetness was here as if to say, “I’m sorry I’m late. I was stuck in traffic, but I’m here now.”  Just this season I had a spoonful of the plain pumpkin yogurt container and that is NOT this, but this is really something enjoyable

When it came to “flipping” the container, I couldn’t get it done. The plastic wasn’t malleable enough and at this early hour I was far from tempted to have to clean the contents up off the floor if I got too mavericky. Like any person desperate to stop thinking and start eating, I took my spoon and slowly laid out the contents atop the yogurt. 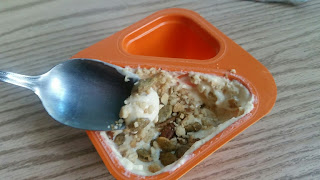 There were ample toppings provided and even once it was completely mixed up, each bite contained something special. The pie crust was broken into very small pieces but the flavor was noticed by my palette and made me feel happy in my belly. The pecans were the run of the mill and as a pecan fan, that was pleasant as well.

Perhaps the most surprising ingredient here was the candied sunflower seeds. While they were sugar coated and had nearly a smoky flavor, they also brought a significant element of salt. I enjoyed this, but admittedly it was a bit of a tongue whiplash. I would be curious what another taste tester of this yogurt might conclude about this.

Overall in combination of low expectations and pie crust, I enjoyed this yogurt. Normally I eat yogurt to be healthy and this certainly lended itself more to being a reasonable dessert. Either way, while I wouldn’t seek this out specifically, I would happily eat this again.
Posted by Amy Nicole at 5:45 AM No comments:

You know what I hate? Popular slang. Two weeks ago a friend of mine called me a “basic bitch” after I said that I was excited for Pumpkin Pie Dairy Queen Blizzards this fall. At the time I had no idea what that meant and my first thought was, “There’s nothing basic about how bitchy I can be,” but now I have further information and since when did enjoying seasonal eats with enthusiasm become “basic”? Usually I am behind by at least six months on whatever is current (I still pay people with checks) and I think I will gladly be the most basic of bitches, so long as this bitch’s basic belly is filled with anything pumpkin.

There were a lot of things about 2014 that impressed me, but one thing that fell a little short for me were Pumpkin Spice M&M’s. While I only managed to have a handful, I remember some type of a spicy burning aftertaste and I would go to great lengths to avoid having a similar experience again. I’d consider biting into a handful of potpourri before eating those on another occasion. At least then I would have a funny story. 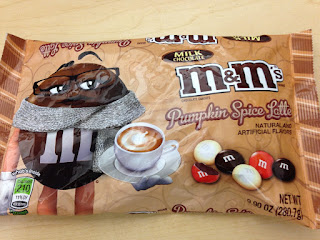 Hearing that this year’s edition of M&M’s would become Pumpkin Spice Latte, I was a quick forgive. My hands were ready to leave the melting to my mouth. "Sign me up!" I thought. On my first trip to Target after reading about them, I was delighted to find a large bag available for purchase and I was surprised that the bag was so lackluster. Where are the leaves? Why is this so beige? Why does this “candy coated woman” look so blasé? If she’s not impressed, then my hopes were already dashed. 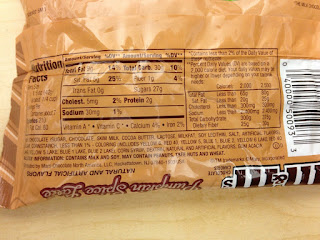 Opening the bag and taking a whiff, I could smell the sweet candy scent of any M&M’s that must be attributed to the coloring and the shell. My nose was also able to detect a tease of a coffee smell, but the pumpkin could not yet be detected. Let me be clear, I am better with my mouth than nose, without a doubt. The coloring chosen for these were reminiscent of fall leaves and the actual size of the M&M’s were a little larger than your typical M&M’s. 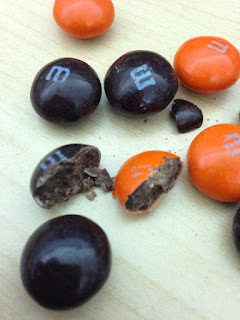 It’s not too hard for a company to flavor something and market it as pumpkin. Add some sugar and allspice and basically that candly effervescent scent and flavor will tell your palette it’s pumpkin. The best part about these is for certain the latte flavor, which was particularly strong. I found the pumpkin to be a smooth supplement to the taste. Biting into these, as the center is larger than normal, the shell to chocolate ratio is less but in a way that makes these seem to be a bit fudgier to bite into than normal. 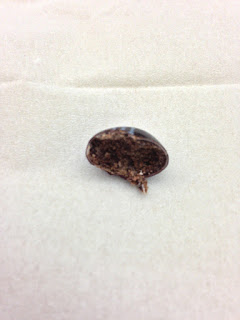 These candies would fare well with a nice cup of steaming hot coffee. Maybe the woman on the wrapper was not impressed by the contents, but I certainly was. I found these M&M’s to be particularly enjoyable and I am hoping to eat them again before the season is over.