Some days you are just lost. You stare into the face of monotony and say, “You win.” You buck up and accept your fate of commuting to life inside of a cubicle and you pause to wonder why nobody told you that this would be how adult life is. Every day is Ground Hog’s day. This realization comes to me about once a week, usually on Tuesdays and then I forget this feeling at some point on Fridays in the afternoon; rinse, repeat.

Sure there are events that happen that add spice and levity to the everyday and these are like meteorites sent down to you through the atmosphere. This is what happened to me on my nearly daily trip to CVS to buy something else that I can’t remember and surely didn’t need. Usually once I’m done making my superfluous purchase, I swing by the local Dunkin’ Donuts for an afternoon iced coffee. The saddest part is that sometimes this is actually the highlight of my day.

On this day, walking into the Dunkin’, I would be hit with said meteorite. Opening the door, I was confronted with a large poster encouraging me to try a maple bacon square donut. How hadn’t I heard of this? I’m in the store daily, I’m a loyalty card member who receives weekly product emails and I spend the majority of my free time researching newly introduced junk foods? Feeling pretty hungry, I was apprehensive that I might just be seeing a water mirage in the desert of starvation, but there would be only one way to find out. 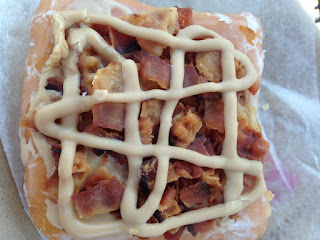 Salivating, I proceeded onward. My normal order was supplemented with this Godsend and the only thing left to do was to eat it. At first glance, I was surprised and happy to see the substantial amount of bacon placed on top. Not only was Dunkin’ generous in distribution, but the bacon itself was quite thick cut. I didn’t have one bite that wasn’t supplemented with the stiff bacon. Obviously, the bacon wasn’t hot so it was a bit on the milder side and surprisingly not at all salty but I would argue that this is exactly what this donut needed. 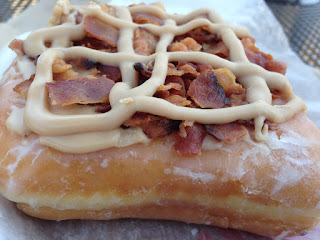 Even better than the bacon was the donut. It reminded me of a marble frosted donut, perhaps because of the maple component and it was extra heavily glazed. There is a maple frosting drizzled on top of the bacony square which is pleasing both aesthetically and to the palette. This worked in the donut’s flavor as the bacon alone would have been on the drier side. Imagine bacon on top of your buttery syrupy pancakes. This isn’t an exaggeration, the donut itself was amazing. It struck me as quite fresh and I loved that it had square corners. Maybe all in my head, but it was fun to bite the corners of the thing on the first bite. 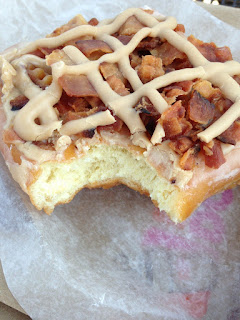 Overall, I really enjoyed this donut and would eat it again at any opportunity. Maybe my pleasure resulting from eating this has something to do with me not having any expectations as I had no idea that Dunkin’ was even coming out with this? Either way, it took my weekday from good enough to great.


The moral of the story is to look tedium in the face and just know that you may walk straight into a bacon maple donut meteorite so don’t let daily life get you too glum.
Posted by Amy Nicole at 9:45 AM